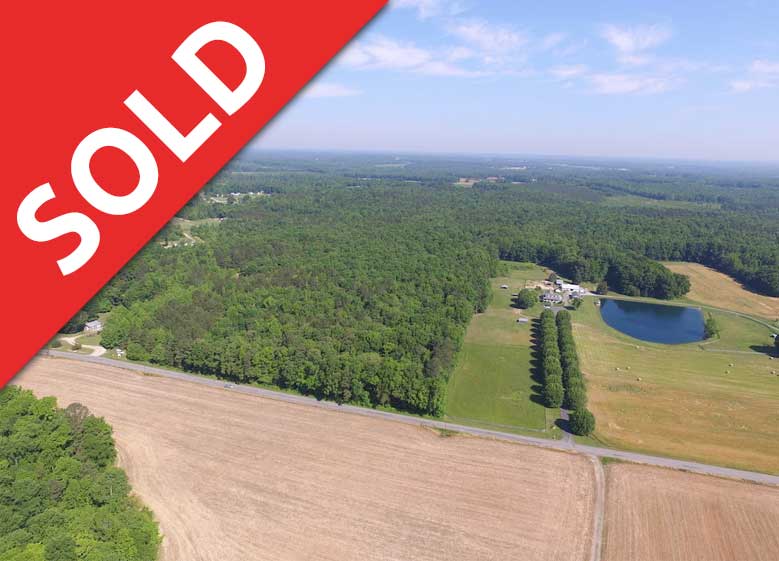 Each parcel has long road frontage.
Eight (8) parcels will be offered individually and the entirety.

Land for sale by auction in Amelia, VA

Long frontage on Hwy. 153 and Route 602 in Amelia/Scotts Fork

Amelia, VA – Nearly 200 acres of land in Amelia/Scotts Fork available for marketable timber, farmland, hunting, and large home-site parcels on Hwy 153 (Military Road) and Hwy 602 on the way to Fort Pickett in Blackstone, VA. The land is offered in eight parcels or its entirety. Each parcel has road frontage, and the area is only 18 miles from Westchester Commons in Midlothian, VA.

Scotts Fork is in a section of Amelia, Virginia and located approximately five miles east of Amelia Courthouse at the intersection of Routes 38, 153 and 602.  State Route 153 (SR 153) is a primary state highway in the U.S. state of Virginia. The state highway runs 17.15 miles (27.60 km) from U.S. Route 460 (US 460) near Blackstone north to US 360 near Winterham. SR 153 is the primary north–south highway of eastern Amelia County. Though closer to major highway 360, Route 153 connects highway 360 and highway 460. The name Scotts Fork originated from the business owners who were also family owners of the properties that surrounded the crossroads.

Complete information about the property and auction details can be found online at www.AmeliaLandAuction.com  or by calling 804-327-9090 or by email at Ernie@ABCole.com.

To download the bidder information package, visit www.AmeliaLandAuction.com or www.ABCole.com.

Amelia County was established in 1735 from parts of Prince George and Brunswick counties.  The County is named for Princess Amelia Sophia of Great Britain, daughter of King George II.

Just 35 miles southwest of Richmond, Amelia County, Virginia has access to all the resources of a large urban center, while providing the benefits of a small community.  Amelia is known for its minerals, including the nation’s best supply of Amazonite found at the Morefield mine. (From the Amelia Courthouse Website)

Scotts Fork came into existence 21 years after the Civil War. A land owner by the name of R. E. Bridgeforth owned about 1,000 acres of land along Route 153 extending from the intersection of Routes 608 and 153. Another property owner was R. D. Maben who owned land from the intersection of Route 602 northward (towards Route 360) on Routes 153 and east of Route 602. During the early 1800’s there was a one-room school named Washington Academy which was in the Scott’s Fork on Route 602 area near the crossroads. R. D. Maben sold the academy’s trustees two acres of land to erect the schoolhouse. On October 19, 1886 Anderson Scott purchased 71 acres of land from R. D. Maben and the area became known as Scott’s Fork. (from the booklet, Scotts Fork Day 1993).

Anderson Scott was the son of Pompey Scott, a horse trader who was born in the early 1800s. Pompey Scott had settled in the Scott’s Fork area during the time the land was owned by R. E. Bridgeforth. His family grew to twelve children and Anderson was Pompey’s son who purchased land and raised his family of 12 children. Between the years of 1908 to 1912, Anderson Scott purchased an additional 70 acres of land in Scotts Fork.  Shortly after purchasing the land, Mr. Scott built his home on Route 602 and married the former Henrietta Epps and had 10 children, Mabel, Della, Douglas, Edmonia, twins Mahone and Frederic, Addie, Oscar, Vanderbilt Yates (V.Y.) and Marion. Later, Anderson Scott built a store on the corner of Routes 153 and 602, known then as Scotts Store, and he also operated a plain mill at his home. He was fortunate to have children who took an interest in the businesses, and they also developed managerial and technical skills to carry on the family businesses. At least one of Anderson’s children, V.Y., completed his college education, and in 1930 finished a mortuary science education.  V.Y took over the family businesses entirely when he returned from obtaining his education.

When Anderson Scott died in 1930, V.Y. and his wife, Effie, took over his dad’s grocery store which also included a gas station. V.Y. Scott Funeral Home was across the road. V.Y. was an exceptional entrepreneur as he grew the country store to include other businesses surrounding the “fork in the road” including Scotts Dance Hall which was over the grocery store, Scotts Lunchroom and Ice Cream Parlor, and the Scotts Barber Shop that was adjacent to the funeral home to serve residents of the community as well as Amelia County. V.Y. made extensive contributions to the community by providing recreational services on his land; Scotts Fork Ball Field and Scotts Fork Hall. He donated land and assisted in the construction of the Masonic Hall and donated acreage to Bethia Baptist Church for the expansion of the cemetery.

Over the years, Scotts Fork grew from an intersection where three roads met to a well-developed and thriving community.

United Country Real Estate  – a division of the United Real Estate Group – is the leading, fully integrated network of